This forum is intended as a place to freely discuss various types of prop weaponry, including (but not limited to) blank firing firearms, airsoft replicas, swords, dummy guns, knives, armor, and more.

Any requests for the Gallery?

Any requests for the Gallery?

well for me behind the scenes photo's of the guys with their guns as pitfighter has put on as i find them interesting, any close ups of moded prop guns to see how they are done, good pics of arms and armour.

*This is in the wrong place, feel free to move, hmm.

Thanks Claymore;
Me posing with cast and extras on "Pit Fighter" 2005, at Universal Studios, CA.
Thompson is my MGC, has now become good luck charm for my films, "Pit Fighter" was my first film to make a profit.
Dominiquie vandenberg, Steven Graham, Stana Katic. 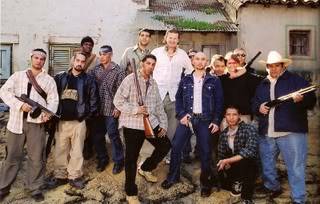 Not a model gun, but a very interesting gun, the 1897 Winchester, I saw this used in "Bullitt" (it kills the mob witness in the hotel room, that opens the movie)-- and then discovered it had the slam fire mechanism, meaning you squeeze the trigger and cycle as fast as you can and the gun fires. Works great with blanks, so I tried it with double ought buck at the range... Don't!
Eric Roberts got really good with it, i had him trained by Mark Stefanich, one of the originators of SEAL Team Six a very good guy.
"The Butcher" 2008.